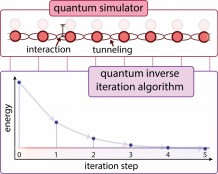 The ground-breaking new technique could pioneer a new pathway towards the next generation of quantum computing.

A new technique to study the properties of molecules and materials on a quantum simulator has been discovered.

The ground-breaking new technique, by physicist Oleksandr Kyriienko from the University of Exeter, could pioneer a new pathway towards the next generation of quantum computing.

Current quantum computing methods for studying the properties of molecules and materials on such a minute scale rely upon an ideal fault-tolerant quantum computer or variational techniques.

This new proposed approach, instead relies on the implementation of quantum evolution that would be readily available in many systems. The approach is favourable for modern state-of-the-art quantum setups, notably including cold atom lattices, and can serve as a software for future applications in material science.

The study could pave the way to studying the properties of strongly correlated systems, including coveted Fermi-Hubbard model, which can potentially offer the explanation of high-temperature superconductivity.

The research is published in the new Nature journal npj Quantum Information.

Dr Kyriienko, part of the Physics department at the University of Exeter and lead author said: “So far I have seen that the ability to run quantum dynamics can be used for finding the ground state properties.

“The question, however, remains - can we use it for studying excited states? Can we devise other powerful algorithm based on the principles? The experience tells this is possible, and will be a subject of future efforts.”

The idea of quantum simulation was proposed by Nobel Prize winner Richard Feynman in 1982, where he suggested that quantum models can be most naturally simulated if we use a well-controlled and inherently quantum system.

Developing on this idea, a separate branch of quantum information science has emerged, based on the notion of quantum computer – a universal quantum device where digital sequences of operations (quantum gates) allow to solve certain problems with superior scaling of required operation as compared to conventional classical computers.

However, the original Feynman’s intention, which was later named analog quantum simulation, so far was mostly used for observing dynamical properties of quantum systems, while precluding finding the ground state associated to various computation tasks.

In the new study, Oleksandr Kyriienko has shown that it is possible to exploit sequential evolution of the system with wavefunction overlap measurements, such that effective study of ground state properties becomes possible with analog quantum simulators.

The main technique which allows to reach ground state is effective representation of non-unitary operator which “distils” the ground state by running the sum of unitary evolution operators for different evolution times.

Importantly, the study suggests that dynamics of the quantum system is a valuable resource for computation, as the ability to propagate the system paired with overlap measurements can give access to the low-temperature spectrum of a quantum system which define its behaviour.

The findings establish the framework with dynamics-based quantum simulation using programmable quantum simulators, and serve as a quantum software to many well-controlled quantum lattice systems where large number of atoms (~100) precludes classical simulation.

This in turn can revolutionize our understanding of complex condensed matter systems and chemistry.