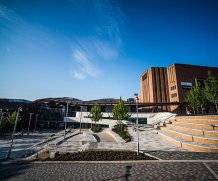 In the relatively short time of 4 years, the network created a flourishing international research community.

Theoretical Physicists at the University of Exeter initiated and have led a major scientific network, bringing together researchers in Europe and the world, to uncover the laws of thermodynamics at the nanoscale.

Historically, thermodynamics has been highly successful, enabling the development of technologies that changed our lives, ranging from fridges to jet planes.

While these applications involve macroscopic systems, described accurately by the laws of classical physics, little is known about the applicability of standard notions of thermodynamics in the quantum regime.

A significant volume of research was being conducted in this burgeoning field, particularly across Europe, but there was an urgent need to establish a collaborative forum for exchange and paving the way for swifter progress.

This is why back in 2013 an international team of researchers, including leading theoretical physicist Professor Janet Anders from the University of Exeter, started the European COST network ”Thermodynamics in the Quantum regime” with its mission being: to develop and nurture the scientific basis that underpins future thermodynamic technologies at the nanoscale.

In the relatively short time of 4 years, the network created a flourishing international research community, that quickly exchanges scientific advances and allows researchers in one country to build on the results of others in other countries.

In time, the network had expanded to be the scientific home to hundreds of researchers from more than 30 countries worldwide.

Professor Anders, from the University of Exeter’s physics department added:  “Given the burgeoning nature of the field, many researchers who joined the network were, and are, early career researchers, including PhD students and Postdocs.

"The network funding has allowed them to attend many high-profile scientific meetings, visit other groups of the network, and build lasting peer-contacts, greatly benefitting their personal development and our future scientific capability.”

Funding for the network lapsed in 2017, but the initial seed funding to create the network has born uncountable fruits.

This includes topics such as, how the link between information and energy in the quantum regime may affect the success of quantum computing, to how a working fluid’s quantum properties can be helpful or detrimental in the operation of engines, to what aspects to consider for heat management at the nanoscale.

In 2018 a comprehensive book, with contributions from more than 100 authors summarising the current knowledge in the field, was published and has since been downloaded more than 64 thousand times.

Coronavirus prompted network members at the University of Dublin to set up weekly online talks about the latest research – the Quarantine Thermo talks streaming on YouTube.

Professor Anders added:  “Science is shaped by the people who understand and improve our knowledge of the natural world in a critical fashion.  Communication and even disagreement and debate between these people are key ingredients in this process.

"The formation of the COST network greatly helped in bringing people together, early career researchers and established professors alike, across the whole globe, contributing a range of interdisciplinary scientific methods.

"This combined wisdom is needed to continue to uncover insights into thermodynamic processes at the nanoscale.”