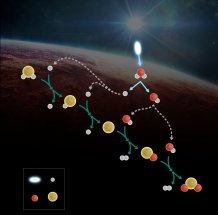 Scientists using NASA’s James Webb Space Telescope have secured a major breakthrough in the quest to unravel the mysteries of the atmospheres of distant planets – a molecular and chemical profile of the exoplanet WASP-39b.

An international team of scientists, including Dr Eric Hebrard of the University of Exeter, have been able to reveal a full menu of atoms, molecules, and even signs of active chemistry and clouds, on the broiling planet’s atmosphere, using readings from the JWS Telescope.

The latest data also give a hint of how these clouds might look up close - broken up rather than a single, uniform blanket over the planet.

The telescope’s array of highly sensitive instruments was trained on the atmosphere of WASP-39 b, which orbits a Sun-like star, about 700 light-years from Earth. The exoplanet is classified as a “Hot-Saturn”, reflecting both its mass being similar to the planet Saturn in our own Solar System and its proximity to its parent star.

The suite of discoveries is detailed in a set of five new scientific papers.

Among the unprecedented revelations is the first detection in an exoplanet atmosphere of sulfur dioxide (SO2), a molecule produced from chemical reactions triggered by high-energy light from the planet’s parent star. On Earth, the protective ozone layer in the upper atmosphere is created in a similar way. This led to another first: scientists applying computer models of photochemistry – one developed at the University of Exeter -  to data that requires such physics to be fully explained.

Dr Hebrard, who was part of the team to make this discovery said: “"This is the first time a photochemical product - a chemical that is produced by the interaction of stellar light with the atmosphere - has been detected on an exoplanet. It is a substantial step forward in our exploration of exoplanet atmospheres”.

Other atmospheric constituents detected by the Webb telescope include sodium (Na), potassium (K), and water vapor (H2O), confirming previous space- and ground-based telescope observations as well as finding additional fingerprints of water, at these longer wavelengths, that haven’t been seen before.

Webb also saw carbon dioxide (CO2) at higher resolution, providing twice as much data as reported from its previous observations. Meanwhile, carbon monoxide (CO) was detected, but obvious signatures of both methane (CH4) and hydrogen sulfide (H2S) were absent from the Webb data. If present, these molecules occur at very low levels.

To capture this broad spectrum of WASP-39 b’s atmosphere, an international team numbering in the hundreds independently analyzed data from four of the Webb telescope’s finely calibrated instrument modes.

Having such a complete roster of chemical ingredients in an exoplanet atmosphere also gives scientists a glimpse of the abundance of different elements in relation to each other, such as carbon-to-oxygen or potassium-to-oxygen ratios. That, in turn, provides insight into how this planet – and perhaps others – formed out of the disk of gas and dust surrounding the parent star in its younger years.

The James Webb Space Telescope is the world's premier space science observatory. Webb will solve mysteries in our solar system, look beyond to distant worlds around other stars, and probe the mysterious structures and origins of our universe and our place in it. Webb is an international program led by NASA with its partners, ESA (European Space Agency) and CSA (Canadian Space Agency).