How do stars form?

Star formation takes place when the force of gravity pulls gas in the galaxy together to form balls. Other forces act against the gravity to slow down star formation, including thermal pressure, turbulent flows, and magnetic fields.

The gravitationally bound balls of gas are initially called protostars. Over millions of years, they contract and heat up until they become dense enough and hot enough to start nuclear fusion, at which point they light up as stars.

Where do stars form?

The main star-forming regions in the Milky Way and other galaxies are Giant Molecular Clouds in the spiral arms. Find out more from Dr Clare Dobbs' models of spiral arms.

Close to the Earth, the Orion Nebula is a well-known star-forming region. The end result of star formation is a cluster of young stars like the Pleaides.

What are stars made from?

The raw material for star formation is mainly gas consisting of molecular Hydrogen (H2) and Helium (both elements formed in the Big Bang) with some molecules of Carbon, Nitrogen and Oxygen (which are formed in stars by nuclear fusion). There is also a little dust (silicon and carbon grains). These elements are widespread in our galaxy and in other galaxies, and end up in the next generations of stars and planets.

The dust blocks visible light, so observers such as Dr Jenny Hatchell use telescopes that operate at longer wavelengths (around a millimetre) to detect the light emitted by dust and gas molecules.

Often the tracer is carbon monoxide (CO), which is the next most abundant molecule to H2. Find out more about observations with the James Clerk Maxwell Telescope. 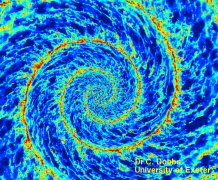 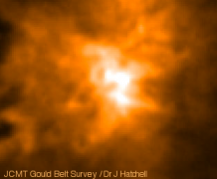 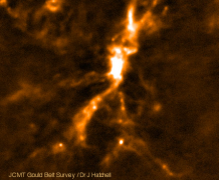 Protostars forming nearby in our galaxy