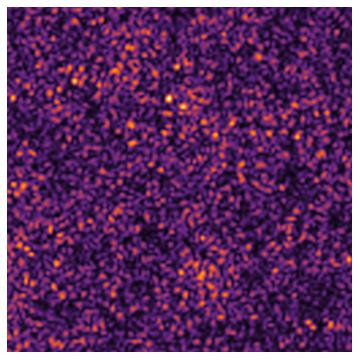 Speckle pattern obtained by shining laser light through a piece of paper. The randomness completely scrambles the light and the sum of many random wavefronts results in a apparently random pattern of bright spots. 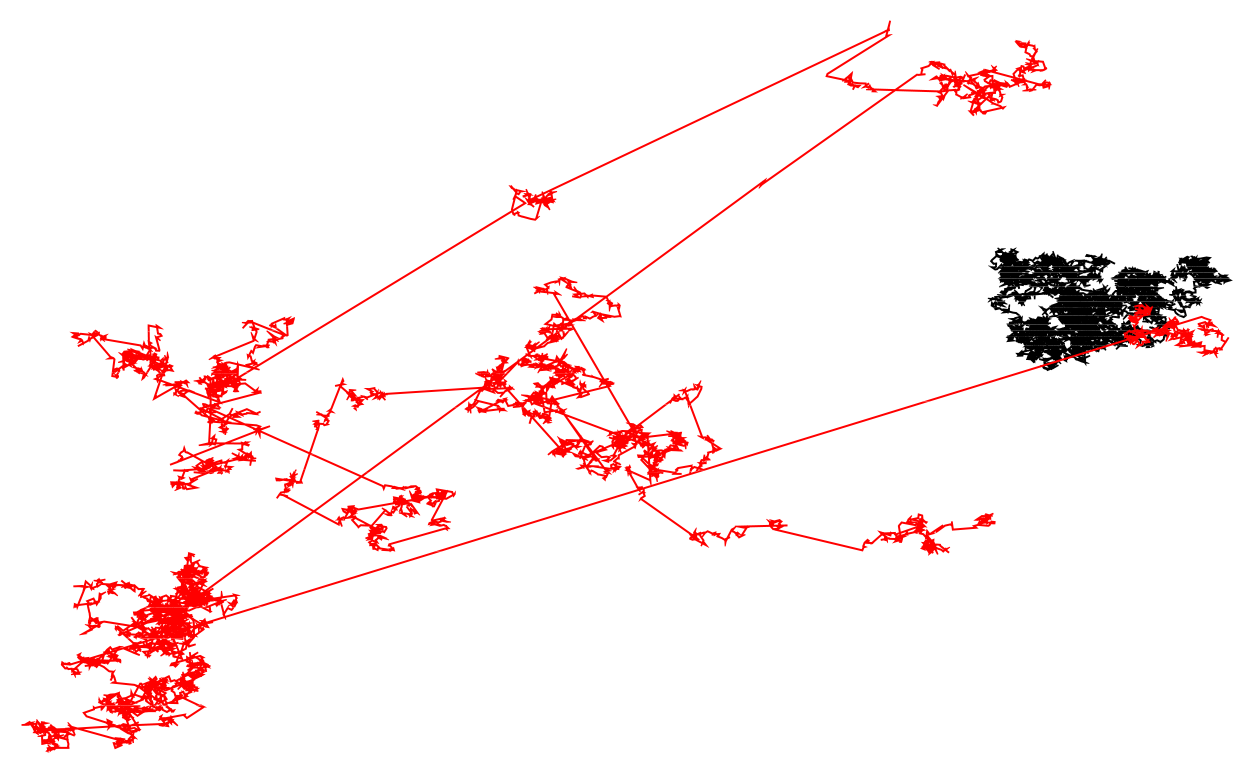 The steps in Brownian random walks (black curve) contribute roughly the same to the overall transport and the walker never moves very far away from the starting point. However a Lévy flight (red curve) is characterised by an infinite variance in the step distribution, and thus the walker has a non negligible probability to make very large jumps.

This subtheme is led by Dr Jacopo Bertolotti

Light is, through vision, one of our main ways to collect informations from the world around us. But the light coming from the sun (or from another source) is reflected, refracted, diffracted, absorbed, re-emitted and scattered from every single piece of matter (including molecules forming the air) encountered on its path. The part that reaches our eyes most likely has undergone a huge amount of such events and is sensibly different from the original white light. Extracting information from this mess is something that our brain does so automatically that we often forget about it. Nevertheless it remains a formidable task to deal with. In particular the multiply scattered component of the light carries, hidden in its apparent smoothness, a huge amount of information that is often desirable to retrieve.

When light interacts with a disordered medium it undergoes a large amount of independent scattering events from randomly positioned particles and therefore interference between different paths is smoothed out by the disorder. The final transport properties become mostly independent both from the wave nature of light and from the particular nature of the scatterers. In this regime light transport can be described effectively by a diffusion process not dissimilar from the one describing heat propagation. And yet, despite its usefulness, this simplistic picture is by far not the end of the story. Since elastic scattering does preserve coherence, multiple scattered light is still able to interfere. But since the disorder completely scrambled its wavefront the result will be a seemingly random speckle pattern

While for weak scattering interference usually do not influence transport much, when the scattering become stronger and stronger its effects become significant. If the amount of disorder is increased the system become more and more diffusive but, contrary to the case of incoherent transport, this behaviour does not continue indefinitely. In fact, when the distance between two successive scattering event become comparable with the wavelength interference effects become dominant, and there is a phase transition to a transport regime where the eigenmodes are exponentially localised and thus no diffusion-like transport is possible anymore. This regime, named Anderson Localisation after P.W. Anderson who fist predicted it, is characterized by a very low mobility (only tunneling between spatially separated modes is possible).

In the textbook case of normal diffusion, particle transport is described as a random walk to which all the steps give the same contribution (Brownian motion). Superdiffusion occurs when the transport is dominated by a few very large steps (Lévy flights). In this regime the variance of the step length distribution diverges and the mean square displacement grows faster than linear with time.

Turbulent media or composite structures (such as biological tissues, rock strata or clouds formations) can give rise to very long-range correlated disorder with large fluctuations. Also complex and non-linear media are known to produce wild oscillations. In all these cases the probability to perform a very large step becomes non-negligible and superdiffusion ensues.

Superdiffusion is known to play an important role in very diverse fields like Ethology, Economy, Geology, Astrophysics, Plasma physics etc. but is still poorly understood. Light superdiffusion offers one of the few experimental system that can be reliably reproduced in the laboratory.

The response of a disordered material to an excitation (e.g. a ray of light) might be complex but it is nevertheless deterministic and, if absorption is negligible, linear. An important consequence of this fact is that, shaping the incident light in both amplitude and phase, it is possible to control the output (e.g. the transmitted light). This allows for an unprecedented ability to control the propagation of light inside a disordered medium and thus to characterize the transport properties of even the most complex media.

Many biological systems appear opaque due to their scattering properties, and therefore impede any attempt to image through them. Our knowledge of the properties of light transport in disordered media allow us to develop novel methods to retrieve informations through the most scattering layers and thus obtain true non-invasive imaging techniques.