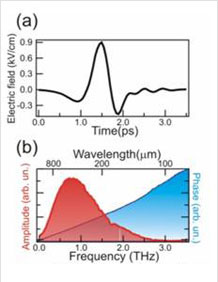 Figure 1. (a) A time domain THz pulse.
(b) Amplitude spectrum (red) and phase (blue) of pulse. 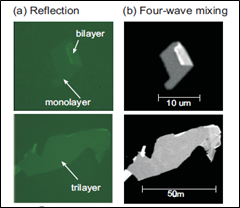 Terahertz electromagnetic radiation is one of the last remaining unexplored regions of the electromagnetic spectrum; occupying a large portion of the spectrum between the infrared and microwave bands. Until relatively recently, the THz region (0.1-3 THz, 0.1-3 mm) has remained in relative obscurity due to a lack of efficient laboratory emitters, detectors and optical components compared to neighboring microwave and optical bands. This is despite the fact that many important processes in nature occur at THz frequencies: for example, the vibrational breathing modes of many large molecules occur at these low frequencies, giving rise to a unique 'fingerprint' for many biomolecules in the THz region. Indeed, it has been proposed that one of the most important future applications of THz radiation will be in biomedicine. In the future the THz region will be as useful as the microwave and infrared frequency bands are today.

Here, we explore the potential for developing new THz components and sensors to fill this “gap”, borrowing from the well established fields of microwave and optical photonics. We employ ultrafast laser sources to generate and detect our THz radiation directly in the time domain. These methods of generating and detecting THz offers several key advantages over conventional spectroscopic measurements: firstly, a short (picosecond) single cycle pulse of THz energy is generated (fig. 1(a)) which allows dynamical studies. Secondly, such a pulse contains a broad spectral bandwidth, so that spectral information about a sample may be easily obtained over a very large range of frequencies, typically covering almost three orders of magnitude in frequency (0.05 - 3 THz – see fig 1). Thirdly, unlike common optical spectroscopes which only measure the intensity of light at specific frequencies, the Fourier transform of THz time-domain measurement gives amplitude and phase information (see fig. 1(b)), providing the real and imaginary parts of the THz response without the use of the Kramers-Kronig relations.

We explore the potential for developing new THz components and sensors based on semiconductor surface plasmons (plasmonics). Semiconductors, with plasma frequencies in the THz range, offer the potential for sustaining SPPs at THz frequencies. Furthermore, semiconductors offer a unique and hugely beneficial advantage over metals: since the surface charge density can be modified by, for example chemical doping, plasma frequencies and SPP properties can be tailored within the THz frequency range. An extension of this is the exciting possibility of all-optical plasmon control, i.e. ‘photo-doping’ a semiconductor with visible frequency light, so that plasma frequencies may be tuned by a visible frequency light source. Using ultrafast laser sources for this purpose, the properties of THz SPP modes can therefore be tailored and switched on very fast (picosecond) timescales, something that is essential for high-bandwidth and/or time resolved applications.

Graphene is an extraordinary optical material. However, the enormous potential of plasmonics as a means to manipulate light at the nanoscale is blocked by ohmic losses associated with the coinage metals currently used. Many real-life applications meanwhile require major improvements in performance, tuneability in wavelength, active control and modulation (for signal switching), and the direct generation and detection of plasmons. Looking to the future, there have been fantastic breakthroughs in recent months through optical measurements of graphene plasmons. We explore the possibility of replacing conventional metals with new atomic scale, graphene-like layered materials. These materials have tuneable electromagnetic responses, as free electrons can controllably introduced by chemical, electrical or photo- doping, making the manipulating light on extreme sub-wavelength length scales possible.

We have also recently shown, that graphene possesses incredibly fast, optical response times at the sub-picosecond level [Hale et al, Phys. Rev. B 83, R121404 (2011)], making it an excellent candidate material for all-optical modulation. Graphene itself also possesses an extraordinarily high optical non-linearity, something that can be put to great use in imaging modalities (see fig.). Our goal is to apply the unique properties of graphene to design new photonic materials which can concentrate and channel electromagnetic energy.