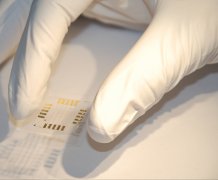 A pioneering new technique could pave the way for the development of the first truly flexible ‘electronic skin’.

A pioneering new technique to produce high-quality, low cost graphene could pave the way for the development of the first truly flexible ‘electronic skin’, that could be used in robots.

Researchers from the University of Exeter have discovered an innovative new method to produce the wonder material Graphene significantly cheaper, and easier, than previously possible.

The research team, led by Professor Monica Craciun, have used this new technique to create the first transparent and flexible touch-sensor that could enable the development of artificial skin for use in robot manufacturing. Professor Craciun, from Exeter’s Engineering department, believes the new discovery could pave the way for “a graphene-driven industrial revolution” to take place.

She said: “The vision for a ‘graphene-driven industrial revolution’ is motivating intensive research on the synthesis of high quality and low cost graphene. Currently, industrial graphene is produced using a technique called Chemical Vapour Deposition (CVD). Although there have been significant advances in recent years in this technique, it is still an expensive and time consuming process.”

This so-called nanoCVD system is based on a concept already used for other manufacturing purposes in the semiconductor industry. This shows to the semiconductor industry for the very first time a way to potentially mass produce graphene with present facilities rather than requiring them to build new manufacturing plants. This new technique grows graphene 100 times faster than conventional methods, reduces costs by 99 % and has enhanced electronic quality.

These research findings are published in the leading scientific journal, Advanced Materials.

Dr Jon Edgeworth, Technical Director at Moorfield said: “We are very excited about the potential of this breakthrough using Moorfield’s technology and look forward to seeing where it can take the graphene industry in the future.”

Professor Seigo Tarucha from the University of Tokyo, coordinator of the Global Center of Excellence for Physics at Tokyo university and director of the Quantum Functional System Research Group at Riken Center for Emergent Matter Science said: "The ability to manufacture high quality, large area graphene (at a low cost) is essential for advancing this exciting material from pure science and proof-of-concept into the realm of conventional and quantum electronic applications. After starting the collaboration with Professor Craciun's group, we are using Exeter CVD grown graphene instead of the exfoliated material in our graphene-based devices, whenever possible."

The research team used this new technique to create the first graphene-based transparent and flexible touch sensor. The team believes that the sensors can be used not just to create more flexible electronics, but also a truly-flexible electronic skin that could be used to revolutionise robots of the future.

Dr Thomas Bointon, from Moorfield Nanotechnology and former PhD student in Professor Craciun’s team at Exeter added: “Emerging flexible and wearable technologies such as healthcare electronics and energy-harvesting devices could be transformed by the unique properties of graphene. The extremely cost efficient procedure that we have developed for preparing graphene is of vital importance for the quick industrial exploitation of graphene.”

At just one atom thick, graphene is the thinnest substance capable of conducting electricity. It is very flexible and is one of the strongest known materials. The race has been on for scientists and engineers to adapt graphene for flexible electronics.

Professor Saverio Russo, co-author and also from the University of Exeter, added: “This breakthrough will nurture the birth of new generations of flexible electronics and offers exciting new opportunities for the realization of graphene-based disruptive technologies. “

In 2012 the teams of Prof Craciun and Profesor Russo, from the University of Exeter’s Centre for Graphene Science, discovered that sandwiched molecules of ferric chloride between two graphene layers make a whole new system that is the best known transparent material able to conduct electricity. The same team have recently discovered that GraphExeter is also more stable than many transparent conductors commonly used by, for example, the display industry.

The research was supported by the UK’s Engineering and Physical Sciences Research Council (EPSRC).