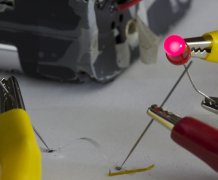 Exeter scientists have been involved in ground-breaking research to create the world’s first truly electronic textile.

An international team of scientists, including Professor Monica Craciun from the University of Exeter, have pioneered a new technique to embed transparent, flexible graphene electrodes into fibres commonly associated with the textile industry.

The discovery could revolutionise the creation of wearable electronic devices, such as clothing containing computers, phones and MP3 players, which are lightweight, durable and easily transportable.

The international collaborative research, which includes experts from the Centre for Graphene Science at the University of Exeter, the Institute for Systems Engineering and Computers, Microsystems and Nanotechnology (INESC-MN) in Lisbon, the Universities of Lisbon and Aveiro in Portugal and the Belgian Textile Research Centre (CenTexBel), is published in the leading scientific journal Scientific Reports.

Professor Craciun, co-author of the research said: “This is a pivotal point in the future of wearable electronic devices. The potential has been there for a number of years, and transparent and flexible electrodes are already widely used in plastics and glass, for example. But this is the first example of a textile electrode being truly embedded in a yarn. The possibilities for its use are endless, including textile GPS systems, to biomedical monitoring, personal security or even communication tools for those who are sensory impaired.  The only limits are really within our own imagination.”

At just one atom thick, graphene is the thinnest substance capable of conducting electricity. It is very flexible and is one of the strongest known materials. The race has been on for scientists and engineers to adapt graphene for the use in wearable electronic devices in recent years.

This new research has identified that ‘monolayer graphene’, which has exceptional electrical, mechanical and optical properties, make it a highly attractive proposition as a transparent electrode for applications in wearable electronics. In this work graphene was created by a growth method called chemical vapour deposition (CVD) onto copper foil, using a state-of-the-art nanoCVD system recently developed by Moorfield.

The collaborative team established a technique to transfer graphene from the copper foils to a polypropylene fibre already commonly used in the textile industry.

Dr Helena Alves who led the research team from INESC-MN and the University of Aveiro said: “The concept of wearable technology is emerging, but so far having fully textile-embedded transparent and flexible technology is currently non-existing. Therefore, the development of processes and engineering for the integration of graphene in textiles would give rise to a new universe of commercial applications. “

Dr Ana Neves, Associate Research Fellow in Prof Craciun’s team from Exeter’s Engineering Department and former postdoctoral researcher at INESC added: “We are surrounded by fabrics, the carpet floors in our homes or offices, the seats in our cars, and obviously all our garments and clothing accessories. The incorporation of electronic devices on fabrics would certainly be a game-changer in modern technology.

Dr Isabel De Schrijver,an expert of smart textiles from CenTexBel said: “Successful manufacturing of wearable electronics has the potential for a disruptive technology with a wide array of potential new applications. We are very excited about the potential of this breakthrough and look forward to seeing where it can take the electronics industry in the future.”

Professor Saverio Russo, co-author and also from the University of Exeter, added: “This breakthrough will also nurture the birth of novel and transformative research directions benefitting a wide range of sectors ranging from defence to health care. “

In 2012 Professor Craciun and Professor Russo, from the University of Exeter’s Centre for Graphene Science, discovered GraphExeter - sandwiched molecules of ferric chloride between two graphene layers which makes a whole new system that is the best known transparent material able to conduct electricity.  The same team recently discovered that GraphExeter is also more stable than many transparent conductors commonly used by, for example, the display industry.

The research was supported by the UK’s Engineering and Physical Sciences Research Council (EPSRC) and by the Royal Society.