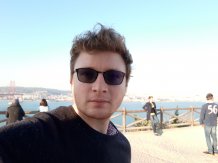 A University of Exeter physicist has earned a University Research Fellowship (URF) from the Royal Society.

Dr Charles Downing, whose PhD research at Exeter was devoted to the theory of graphene, and who later conducted postdoctoral work across France and Spain in the field of nanophotonics, will work on a project entitled: "Chiral and topological nanophotonics: from theory to applications."

The URF scheme was established to identify outstanding early-career scientists who have the potential to become leaders in their chosen fields, and to provide them with the opportunity to build an independent research career.

The fellowship lasts for five years, and previous fellows include the 2010 Nobel Prize winner in physics Sir Kostya Novoselov, and the Fields medallist Richard Borcherds.

"I am honoured to receive this fellowship, which gives me the opportunity to explore some fascinating areas of modern physics," said Dr Downing.

"I am delighted to have the chance to collaborate with Exeter’s existing physics staff, and to work with the next generation of research students on some captivating physics problems which have a real world impact."

Dr Downing will begin his fellowship at Exeter in October, five years after being awarded a PhD in Physics from the same university.

He will join the Quantum Systems and Nanomaterials research group in Physics, who are world leaders in exploring quantum phenomena at the nanoscale, and in exploiting the found effects for novel applications.

Dr Downing is a theorist, and during his fellowship he will work closely with Exeter’s existing experimental teams to uncover the topological aspects of quantum materials, with the goal of mastering the next generation of materials which can improve people’s lives.

His URF project seeks to exploit powerful ideas from the mathematics of topology and geometry, and apply them to new systems where the coupling of light and matter is important, with a view to applications in future quantum technologies.

Professor Mikhail Portnoi, who will served as Dr Downing's mentor during the fellowship, said: "It is especially exciting that Charles returns to us as a University Research Fellow, having obtained both his undergraduate degree (1st class MPhys in Physics) and his PhD in physics from the University of Exeter.

"His first two research publications, both highly cited, resulted from his MPhys project research, and I had a great pleasure of supervising both Charles’ MPhys Project (for which he was awarded the Newman Prize) and his PhD.

"Charles is not only a brilliant researcher, but he was also nominated by Physics undergraduates for Best Postgraduate Teacher at the Teaching Awards in 2012 and 2014, and is ideally suited to inspire the next generation of Exeter students."

Venki Ramakrishnan, the President of the Royal Society: said: “The URF scheme celebrates and rewards high calibre early career scientists throughout the UK and Ireland.

"While Brexit and the pandemic will have an impact on early career researchers, it is gratifying to see this year’s URF scheme continuing to support talented researchers from around the world.

"This is vital for sustaining the talent pipeline that the UK’s science and innovation sector relies on.

"The scheme’s alumni go on to achieve great things within their disciplines, with their research contributing to the advancement of our society.”