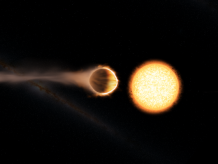 Stunning virtual tour of exoplanets takes its one millionth ‘passenger’

Stunning virtual tour of exoplanets takes its one millionth ‘passenger’.

One million budding astronomers and space enthusiasts have taken a magical tour to explore the exotic worlds orbiting distant stars, through a stunning virtual reality documentary.

The spectacular and dramatic first-person journey across the landscape of six exoplanets was designed and created by astrophysicists from the University of Exeter, in conjunction with ‘We The Curious’ in Bristol and visual effects artists from Cornwall-based animation studio Engine House.

The team created a detailed 360° visual display to teleport viewers from Earth to these exotic worlds, to see how they differ from our own planet.

The researchers also provide a commentary to guide virtual space travellers through the experience.

Since launching late last year, the virtual planet tour has attracted one million views on the social media channel, Youtube.

Nathan Mayne, from the University of Exeter and scientific lead on the project said: “It is great to know that our research into distant planets has fascinated so many people. However, more importantly hopefully through this video we have been able to explain and demystify our research enabling everyone to understand and get excited about our exploration of the planets in our galaxy.

“The most enjoyable thing about this project is the opportunity to work with our expert partners to really bring the research to life in a visually engaging way. This combined with narration from our PhD students really allowed us to produce a unique experience and insight for the viewer.

“The mini-documentary gives a snapshot of astrophysical techniques, and what we have learned about planets using them. I really hope that this video continues to allow people to engage with this scientific field.”

The pioneering video transports viewers to a range of exotic planets beyond our solar system.

These planets include: Wasp - 121b, a planet so close to its star that its atmosphere is being driven off by its parent star; Kepler-62e, a planet which is potentially entirely covered by a deep ocean, and ravaged by monster waves, and 55 Cancri e, a hellish planet likely to be covered in vast lava flows and constantly engulfed in huge lightning storms.

At the time of its launch Ross Exton, video producer for We The Curious said: “I wanted to create something I’d never seen before.  By collaborating with talented visual effects artists and astrophysicists currently studying these exoplanets, we were able to create a series of visuals which are not only stunning, but are informed by real scientific research.”