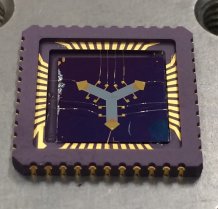 The team of researchers used devices, known as thermophones, to create a fully controlled array from just a thin metal film attached to some metal wires. Credit: David Tatnell

Scientists have pioneered a new technique to produce arrays of sound produced entirely by heat.

The team of researchers from the Centre for Metamaterial Research and Innovation at the University of Exeter used devices, known as thermophones, to create a fully controlled array from just a thin metal film attached to some metal wires.

The results, published in Science Advances, could pave the way for a new generation of sound technology, including home cinema systems.

Traditionally, arrays have been used in a host of every day applications, including ultrasound and sound systems.   Arrays allow sounds from several sources to be ‘steered’ in a certain direction, to gain greater control and clarity of the sound produced.

Conventional speaker arrays rely on the production of sound through driven movement of some object - such as a speaker cone. The new study, however, pioneers arrays of speakers that produce sound entirely by heat: thermophones.

Although thermophones have been in existence for more than 100 years, they have, until now, had limited real-world application. However, they have a host of advantages from their mechanical counterparts - including no moving parts and the ability to be mass produced from inexpensive, sustainable materials.

Crucially, they can even be made transparent and flexible, which is desirable for the new wave of flexible technologies being produced.

For the study, the researchers found that, when combined into an array, thermophones are able to reproduce the same control over sound fields as traditional arrays.

However, they do much more than this: as they are driven by electrical currents, the sound they produce mirrors the subtle movement of the current carriers as they flow through the device and, as a result, they create a much richer sound field than traditional arrays.

The researchers suggest that the study opens a route to radically simplify array design, showing that with thermophone technology, it is possible to create a fully controlled array from nothing more than a thin metal film attached to some metal wires.

David Tatnell, lead author of the study and a PhD researchers at the EPSRC Centre for Doctoral Training in Metamaterials said: “Using heat to produce sound is a game changer as it allows us to make speaker arrays smaller than ever before.  This, as well as the ability to make the speakers flexible and transparent, has a lot of exciting potential applications, such as haptic feedback systems in smartphones and other wearables.”

Coupling and confinement of current in thermoacoustic phased arrays is published in Science Advances on July 1st 2020.