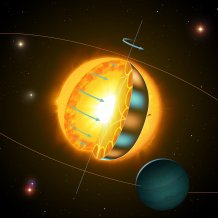 Sound waves trapped inside stars cause them to oscillate at particular frequencies. These vibrations are visible on the surface, and can be measured by astronomers using space telescopes. When a star is rotating these oscillation frequencies change slightly, making it possible to measure the star's rotation by looking at how it's surface changes over time. Credit: Mark Garlick / University of Birmingham

The science of spin - older stars rotate faster than expected

Stars spin faster than expected as they age, according to a new study - which uses asteroseismology to shed new light on this emerging theory

All stars, like the Sun, are born spinning. As they grow older, their spin slows down due to magnetic winds in a process called ‘magnetic braking’. Research published in 2016 by scientists at Carnegie Observatories delivered the first hints that stars at a similar stage of life as the Sun were spinning faster than magnetic braking theories predicted.

The results from this study were based on a method in which scientists pinpoint dark spots on the surface of stars and track them as they move with the stars’ spin. While the method has proven robust for measuring spin in younger stars, however, older stars have fewer star spots, which has made the effects of this “weakened” magnetic braking on these stars hard to confirm.

In a new study, published in Nature Astronomy, a team of researchers, led by the University of Birmingham and including experts from the University of Exeter, used a different approach to confirm that older stars do, in fact, appear to rotate faster than expected.

In this study, the team measured the modes, or the frequencies, of the sound waves produced by the star’s oscillation. As the star spins, these modes split into different frequencies. This can be imagined, the author’s say, as the sound of two ambulances stood still on a roundabout compared to when they are driving in circles. By measuring these frequencies, it is possible to calculate the rate of spin in a way that is possible for both young and old stars.

Dr Victor See, from the University of Exeter said: Slowing down with age is a reality that most of us face, and it turns out the same is true for stars. This study uses a novel approach to shine new light on how quickly the stellar spin slows down.

“It is just the next step on improving our grasp of how a star’s rotation changes over time, but it is a crucial step nevertheless. This work also has important consequences for our understanding of magnetic field and solar wind generation which are known to be related to rotation.”

Lead author on the paper, Dr Oliver Hall, said: “Although we’ve suspected for some time that older stars rotate faster than magnetic braking theories predict, these new asteroseismic data are the most convincing yet to demonstrate that this ‘weakened magnetic braking’ is actually the case. Models based on young stars suggest that the change in a star’s spin is consistent throughout their lifetime, which is different to what we see in these new data.”

One aspect the researchers believe could be key to the change in momentum loss, is changes to the star’s magnetic field. Understanding how the magnetic field interacts with rotation will be an important area of future study, and is being worked on by authors on the paper.

The results could also shed light on our own star’s activity over the next several billion years, explains co-author Dr Guy Davies: “These new findings demonstrate that we still have a lot to learn about the future of our own Sun as well as other stars. This work helps place in perspective whether or not we can expect reduced solar activity and harmful space weather in the future. To answer these questions we need better models of solar rotation, and this work takes an important step towards improving the models and supplying the data needed to test them.“

Other contributors to the study include the European Space Agency (ESA), Aarhus University, University of Hawai’i, and the Universit´e Paris-Saclay.