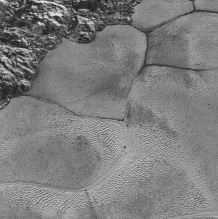 Mystery behind formation of surface ice-shapes on Pluto unravelled

Scientists have unravelled a fascinating new insight into how the landscape of the dwarf-planet Pluto has formed.

A team of international researchers, including Dr Adrien Morison from the University of Exeter, has shown how vast ice forms have been shaped in one of the planet’s largest craters, Sputnik Planita.

Perhaps the most striking feature on Pluto’s surface, Sputnik Planitia is an impact crater, consisting of a bright plain, slightly larger than France, and filled with nitrogen ice.

For the new study, researchers have used sophisticated modelling techniques to show that these ice forms, polygonal in shape, are formed by the sublimation of ice – a phenomenon where the solid ice is able to turn into gas without going through a liquid state.

The research team show this sublimation of the nitrogen ice powers convection in the ice layer of Sputnik Planitia by cooling down its surface.

The research is published in the leading journal Nature on Wednesday, December 15th 2021.

Dr Morison, a Research Fellow from Exeter’s Physics and Astronomy department said: “When the space probe New Horizon performed the only, to date, fly-by of Pluto in 2015, the collected data was enough to drastically change our understanding of this remote world.

“In particular, it showed that Pluto is still geologically active despite being far away from the Sun and having limited internal energy sources. This included at Sputnik Planitia,  where the surface conditions allow the gaseous nitrogen in its atmosphere to coexist with solid nitrogen.

In the new study, the research team conducted a series of numerical simulations  that showed the cooling from sublimation is able to power convection in a way that is consistent with numerous data coming from New Horizons  - including the size of polygons, amplitude of topography and surface velocities.

It is also consistent with the timescale at which climate models predict sublimation of Sputnik Planitia, beginning around 1 - 2 million years ago. It showed that the dynamics of this nitrogen ice layer echo those found on Earth’s oceans, being driven by the climate.

Such climate-powered dynamics of a solid layer could also occur at the surface of other planetary bodies, such as Triton (one of Neptune’s moons), or Eris and Makemake (from Kuiper’s Belt).