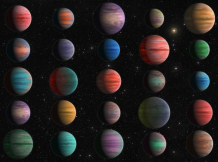 A team of international researchers has solved five open questions, important to the understanding of exoplanet atmospheres, using archival observations of 25 hot Jupiters by the NASA/ESA Hubble Space Telescope.

Amongst other findings, the team discovered that the presence of metal oxides and hydrides in the hottest exoplanet atmospheres clearly correlated with the atmospheres being thermally inverted.

While exoplanet research has evolved beyond detection towards characterization of the distant worlds, it has traditionally involved either computational modelling, or studies focusing on one or a few exoplanets.

In the new study involving an international team coordinated by University College London (UCL), researchers have used the largest amount of archival data ever examined in a single exoplanet atmosphere survey to analyze the atmopheres of 25 exoplanets.

The majority of the data came from observations taken with the NASA/ESA Hubble Space Telescope.

They chose to investigate a wide range of hot Jupiters, with the intention of identifying trends within their sample population that might provide insight into exoplanet atmospheres more generally.

Michelle Bieger, a PhD student at the University of Exeter and co-author of the study said: “It’s been incredible to be a part of such a big international effort. These large population studies are vital component of understanding trends within our planetary zoo, and provide key insights that help guide us in analyzing individual planets.”

In order to investigate their sample of 25 exoplanets, the team reanalysed an enormous amount of archival data, consisting of 600 hours of Hubble observations, which they complemented with more than 400 hours of observations from the Spitzer Space Telescope.

Some of the key findings related to the presence or absence of thermal inversions in the atmospheres of their exoplanet sample – with almost all the exoplanets displaying this characteristic reaching extremely high temperatures, often of more than 2,000 Kelvins.

Importantly, those planets are sufficiently hot so that metallicspecies, such as TiO (titaniumoxide), VO (vanadiumoxide) and FeH (ironhydride), are stable in their atmospheres (i.e they remain in gaseous form and do not condensate).

This is extremely useful, because those molecules, captured during the formation of the planets, can provide insight into how they may have formed.

Lead author, Quentin Changeat from UCL said: “Hubble enabled the in-depth characterization of 25 exoplanets, and the amount of information we learnt about their chemistry and formation – thanks to a decade of intense observing campaigns – is incredible.”