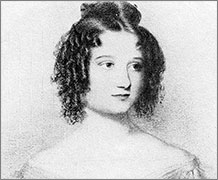 The event will pay tribute to Ada Lovelace, the famed mathematician.

Exeter celebrates the world’s first programmer and women in science

Ada Lovelace Day is an international celebration of the achievements of women in science, technology, engineering and maths (STEM).

Female scientists and researchers will gather to talk about their respective subjects, with Dr Jacqueline Christmas hosting the event paying tribute to Ada Lovelace, a famed mathematician.

The event will take place on Tuesday 13 October at Café Scientifique, Sidmouth. It will celebrate women’s achievements in Science, Technology, Engineering, Maths and Medicine (STEMM), in addition to the recognition of Ada’s work in the field.

Speaking before the event, Dr Jacqueline stressed Ada’s importance to the field of artificial intelligence, saying: ‘Ada was educated as a mathematician in a time where women were educated in sewing. She can be considered the world’s first programmer.’

As well as celebrating Ada’s past, she will be featuring the present and future; looking at how artificial intelligence (AI) affects people in their day-to-day lives and what to expect from it in the future.

Ada, the daughter of renowned poet Lord Byron, was born in London on December 10, 1815. Here her education was maths and science-centric, with Ada being asked to translate Luigi Menebrea’s work in 1842. Rather than translate, she continued the research further and created what was considered the first algorithm for the Analytical Engine. It had the capacity to compute recognised sequences of numbers.

Ada Lovelace Day is held at Cafe Scientifique which takes place at 3pm. Dr Jacqueline Christmas’ talk begins at 3pm, with Martha Vardako hosting in the evening at the Norman Lockyer Observatory.