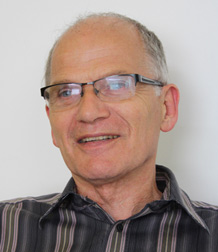 Professor Roy Sambles is the new president of the Institute of Physics (IOP).

Professor Roy Sambles has today (Thursday, October 1) taken up his position as the new president of the Institute of Physics (IOP).

Professor Sambles, from the University of Exeter’s Physics and Astronomy department, succeeds Dr Frances Saunders in the prestigious role and will serve as president for two years. He has served as president-elect since October 2013, having been chosen by the IoP’s Council.

Professor Sambles has been professor of experimental physics at the University of Exeter since 1991, where he is academic lead of the large electromagnetic and acoustic materials research group.

On taking up the role he said: “I am delighted and honoured to be the new president of the Institute of Physics, it is a truly prestigious position and one that I will embrace with enthusiasm, commitment and immense satisfaction.

“It is an opportunity for me to continue the outstanding work of the Institute in developing both the public awareness of, and inclusiveness in, physics and furthering the understanding of the value of physics to society in the years to come.”

Professor Sambles’ research focuses on the electromagnetic and acoustic properties of metamaterials encompassing potential developments in ‘cloaking’ as well as radio frequency communications, while his earlier research included work on the fundamentals of melting, spin waves in alkali metals, liquid crystal optics and plasmonics.

Professor Sambles said that there are three main issues on which he aims to focus: encouraging more women to remain in physics after leaving school, enhancing industry engagement, and ensuring physics teachers are “properly recognised and rewarded for the amazing things that they do.”

Born and educated at school in Cornwall, Professor Sambles has worked at the University of Exeter for forty years and currently lives in Crediton in Devon. After taking his undergraduate degree and doctorate at Imperial College London, he was a research fellow at Imperial for two years before being appointed as a lecturer in physics at Exeter in 1972. He became a senior lecturer there in 1985, a reader in 1988 and was made professor in 1991. He holds more than 20 patents and his research has helped to underpin technological developments at BAE, Sharp, Qinetiq, Hewlett Packard and the Defence Science and Technology Laboratory.

Professor Sambles has also been a member of the government funding agency for scientific research in UK Universities, the Engineering and Physical Sciences Research Council (EPSRC), since 2008, and has served on many EPSRC committees and panels.