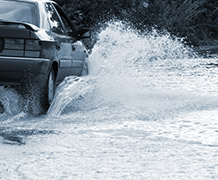 Three new research programmes, led by or featuring the University of Exeter, that aim to tackle some of the major challenges facing science and engineering have been announced.

Science Minister Jo Johnson today (October 16) gave the green light to seven new research programmes across the UK, during a visit to the University of Cambridge.

Funded by £21 million from the Engineering and Physical Sciences Research Council (EPSRC), the research consortia will involve 19 UK universities and 80 partners. They will begin work in December and are supported by an additional £11 million investment from industry to bring the total level of support to £32 million.

The University of Exeter is leading one of the research projects, entitled BRIM: Building Resilience Into risk Management, and which received a grant of £400,000.

This network, which includes partners from the universities of Loughborough and Cranfield, will allow researchers to better understand the tipping points of systems – particular infrastructure. It will also enable the modelling of complex scenarios, such as the impact of the 2014 winter floods’ impact on the social and transport networks and other knock-on effects.

This will help policy makers to gain a better understanding of the risks and critical interdependencies and prioritise interventions after various events – this will enable a more productive asset management approach.

Dr Guangtao Fu, Senior Lecturer in Engineering at Exeter and Principal Investigator for the programme said: “The BRIM Network will develop a shared, multi-disciplinary vision of how to build resilience into networked risk management for highly complex engineered systems.”

“This network will provide a range of mechanisms including workshops, sandpits and feasibility studies to nurture the development of novel methods and tools for identifying tipping points of interdependencies and managing cascade effects of extreme events, such as floods and droughts.”

The University of Exeter is also a partner in project led by Loughborough University, called SYnthesizing 3D METAmaterials, which has been awarded £3.9 million

The consortium aims to radically evolve the development of high frequency circuits for systems and how these are manufactured.  The project will seek to understand the behaviour of the building blocks of new materials, termed “meta-atoms”, to allow the creation of new types of circuits or transmission lines  -  which are the bedrock of our technology driven economy.

Professor Alastair Hibbins, Associate Professor in Metamaterial Physics and part of the consortium, said: “This project builds on some pioneering work that one of our PhD students was studying a couple of years ago who was considering how we can build artificial atoms to produce new materials with “designed-in” electromagnetic properties.

“At the time advancing the idea further was difficult due to the limitations in the equipment available.  But this new consortium, with partners with expertise in additive layer manufacturing , materials engineering and computer modelling, and recent advances in technology, means that we can begin to manufacture designs that were previously impossible.”

Exeter is also a partner university in the £3.9million research project called TWENTY 65 (Tailored Water to Ensure sustainability beyond 2065), and led by the University of Sheffield.

The project will help the UK water sector tackle key challenges, including population growth, ageing infrastructure and climate change. The academic partners will undertake research across eight technical themes, focusing on demand based technologies, social practices, water energy systems to minimise carbon emissions and the use of robotic autonomous systems for infrastructure inspection and repair.

The projects were developed in response to a call, Towards Engineering Grand Challenges: Network and Multidisciplinary Research Consortia, from EPSRC in early 2015 which listed four Engineering Grand Challenges. These were developed at a special two-day event in 2014 involving academics from many disciplines, representatives from industry and government.

Universities and Science Minister Jo Johnson announced the funding during a visit to the University of Cambridge, who will be leading the £4.1 million project to manage air-flow in cities to reduce pollution and enhance air quality within cities.

Jo Johnson said: “As a One Nation Government we are investing in world-class science and engineering across our country. We want the UK to be the best place in Europe to innovate and this £21 million investment will bring together the nation’s researchers to address some of the most pressing engineering challenges we face. From ground-breaking work with robotics to advanced air-flow simulators, this investment will help tackle our aging water infrastructure and air pollution in cities to improve the lives of millions of people around the world.”

Professor Philip Nelson, EPSRC’s Chief Executive, said: “Economic and political forces will shape the world of the future but these are often led and influenced by advances in science and engineering. The projects announced today will help us plan and maintain our cities, reduce our energy consumption and develop new materials, innovative devices and technology. The UK has world-leading academic talent to enlist in the challenges we face as a country and as a species. Investing in research is investing in the UK’s future.”