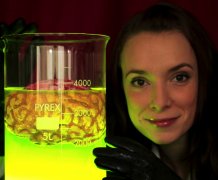 Dr Natalie Garrett, who will be one of the speakers at the Soapbox Science event.

Female scientists take to their soapboxes at free public event

A host of Devon’s leading female scientists will be taking to their soapboxes this week to showcase their fascinating science to the general public at a free event in Exeter city centre.

This Saturday (13th June 2015) between 1-4pm, Princesshay Square will be transformed into a hub of scientific learning and discussion, with 12 experts speaking on subjects as far ranging as the human brain, alien planets, animal migration and marine fish poo.

The event’s mission is to help eliminate gender inequality in science by raising the profile, and challenging the public’s view, of women and science. Its organisers want to make sure that everyone has the opportunity to enjoy, learn from, heckle, question, probe, interact with and be inspired by some of our leading scientists.

Dr Safi Darden of the University of Exeter, who is co-ordinating Exeter’s Soapbox Science, said: “I have been positively overwhelmed by the amount of enthusiasm and support I am getting from anyone I approach about helping out with this event, from the staff at Princesshay to the carpentry company that offered to build our soapboxes at no charge. It is really coming together as an exciting, grassroots event and we look forward to welcoming the public to participate.”

Speakers will include Hannah Wakeford, who has just handed in her PhD thesis in astrophysics at the University of Exeter and will shortly take up a new role with NASA based in the USA. Her soapbox talk ‘Exploring alien planets’will make use of a selection of props including a fluffy toy sun and a well-stocked fruit basket. Hannah said: “Soapbox Science is a brilliant way to showcase the amazing work being done by scientists that the general public do not normally get to learn about.”

Dr Lucy Hawkes of the Centre for Ecology and Conservation at the University of Exeter's Penryn Campus in Cornwall will be showing how she and colleagues are using “very cool” tracking technology to study animal migration and reveal the fastest, furthest and highest animal champions in the world.

During her spell on the soapbox, Dr Ana Neves of Engineering will amaze the audience with the possibilities of smart textiles and her research into building electronic devices directly onto textile fibres, posing the question, “What if you could make a phone call using your sweater instead of your mobile?”

Dr Natalie Garrett, from Exeter’s Physics and Astronomy department, will be giving a talk entitled "Brilliant brains and biophotonics”, where she will explain how lasers can help us find out the ways that nano-particles improve drug uptake to the brain. Dr Garrett said: “I’m a keen science communicator and I enjoy discovering new ways to bring my research to the general public’s attention. When I heard about Soapbox Science I thought it sounded great, so I had to get involved.”

The event is sponsored by Science and Technology Facilities Council and the University of Exeter’s College of Life and Environmental Sciences. The soapboxes have been provided by Creative Carpentry South West.

For a full list of speakers and more information about the event visit soapboxscience.org