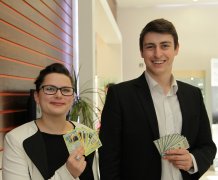 Hannah Wakeford and Simon Clark, who have produced the Top Female Scientist Game.

Do you know why Dorothy Hill or Rosalind Franklin are considered pioneers in their fields? Ever wondered who left the greatest legacy -  Ada Lovelace or Marie Curie?

The answers could be resolved in a new game, created by students at the University of Exeter.

Hannah Wakeford and Simon Clark have devised a card game that pits some of history’s greatest female scientists against each other over a series of specialist categories.

The ‘Top Female Scientist card game’ features 32 of the most celebrated and distinguished names in maths, natural sciences, physics, chemistry and biology.

By comparing the scientists for their innovation, impact, obscurity and ‘badassery’, the goal of the game is to determine who can be considered the ultimate female scientist of all time.

The thought-provoking game is available free to download for secondary schools across the country.

Both Hannah and Simon hope it will stimulate an interest in the sciences, and particularly  raise the profile of women in science, as well as their ground-breaking research and innovations that have helped shape the world today.

Hannah, a postgraduate Astrophysics student, said: “We really wanted to shine the spotlight not just on females in science, but also the fantastic achievements that so many have made through the centuries.

“There are names that most people instantly recognise, such as the great Marie Curie, but we wanted to raise the profile of so many others who have contributed to modern society.

“By making the card game available for schools, we are hoping not just to stimulate some debate about those involved, but also to try and encourage the next generation of female scientists to be inspired by those who have come before them.”

The game is being launched in the run up to International Women’s Day, an annual celebration of the social, political and economic achievements of women across the world.

This year’s theme is “Equality for women is progress for all”, a significant part of which is to emphasise the vital role of women as agents of development and change.

Simon, a postgraduate Mathematics student, added: “We have tried to show the multitude of areas across the sciences in which  women have had an incredible impact. As well as echoing the very ethos of International Women’s Day, we hope that it will also bring these wonderful scientists into a more prominent position in our minds.”

The Top Female Scientist Game is available to download, for free, by visiting http://imgur.com/gallery/SKM8B

The game was launched on the Science Hour show on XpressionFM. To listen again, please visit here.