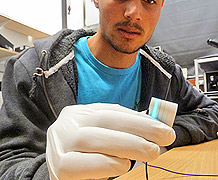 GraphExeter is a material adapted from the ‘wonder material’ graphene.

Researchers from the University of Exeter have pioneered an innovative new technique to make flexible screens more effective and efficient.

A team of Engineers and Physicists from Exeter have discovered that GraphExeter – a material adapted from the ‘wonder material’ graphene - can substantially improve the effectiveness of large, flat, flexible lighting.

By using GraphExeter, the most transparent, lightweight and flexible material for conducting electricity, instead of pure graphene, the team have increased the brightness of flexible lights by up to almost 50 per cent.

The research has also shown that using GraphExeter makes the lights 30 per cent more efficient than existing examples of flexible lighting, which are based on state-of-the-art commercial polymers.

The research team believe the breakthrough could help significantly improve the viability of the next generation of flexible screens, which could be used for display screens, smartphones, wearable electronic devices, such as clothing containing computers or MP3 players.

The study is published in respected scientific journal, ACS Materials and Interfaces, on Thursday, 16 June 2016.

One of the lead researchers, University of Exeter physicist Dr Saverio Russo, said: “This exciting development shows there is a bright future for the use of GraphExeter in transforming flexible lighting on a mass scale, and could help revolutionise the electronics industry.

“Not only are lights that utilise GraphExeter much brighter, they are also far more resilient to repeated flexing, which makes ‘bendy’ screens much more feasible for day to day goods such as mobile phones.”

Currently, flexible screens are still in their infancy and although they are useable, the size of the screens are limited by the materials used for mass production, which can cause a visible gradient of brightness as the size of screen increases.

By substituting graphene for GraphExeter, the team of researchers were able to create a lit screen that showed a far greater and more consistent light than has previously been possible. Furthermore, the screens were more resilient to continued flexing, meaning that they have a longer shelf-life before needing to be replaced.

Dr Monica Craciun, also from the University of Exeter added: “The next step will be to embed these ultra-flexible GraphExeter lights on textile fibres and pioneer ground-breaking applications in health care light therapy.”

At just one atom thick, graphene is the thinnest substance capable of conducting electricity. It is very flexible and is one of the strongest known materials. The race has been on for scientists and engineers to adapt graphene for flexible electronics. This has been a challenge because of its sheet resistance, graphene dissipates large amounts of energy.

In 2012 the teams of Dr Craciun and Profesor Russo, from the University of Exeter’s Centre for Graphene Science, discovered that sandwiched molecules of ferric chloride between two graphene layers make a whole new system that is more than a thousand times a better conductor of electricity than graphene and by far the best known transparent material able to conduct electricity. The same team have now discovered that GraphExeter is also more stable than many transparent conductors commonly used by, for example, the display industry.